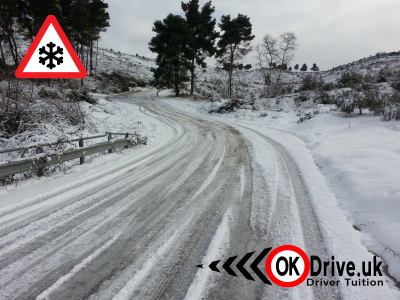 When driving in snow or ice you should?

We would advise you not to travel in severe weather if you can possibly avoid it.

However, if the journey is unavoidable, there are a few things you should do before each journey in severe weather.

Check your emergency kit.
Check tyres.Check lights and wipers.Clean windscreen, windows and mirrors.
Clear any snow off the roof of the vehicle before you drive away.
Clear any snow and ice from all windows, lights and number plates. Make sure you can see clearly and be seen.
Make sure your mobile phone is fully charged – but don’t use while driving.
Take some food and a warm drink in a flask in case you get stuck.
Don’t forget to take any personal medication too!

Driving through ice and snow

If you find yourself out and about in severe weather conditions:

Make sure the windscreen, back and side windows are thoroughly de-iced on the outside and clear on the inside before setting off. Don’t simply clear a ‘porthole’ to look through.
Lower your speed in poor visibility and poor driving conditions.  It’s better to drive slowly and smoothly to avoid braking sharply.
Use the highest gear possible to avoid wheel spin, without increasing your speed.
Select 2nd gear when pulling away, easing your foot off the clutch gently to avoid wheel spin.
Brake gently to avoid locking the wheels. Get into a low gear earlier than normal and allow the speed of the vehicle to fall gradually.
Maintain at least a 10 second gap between you and the vehicle in front. It takes 10 times further to stop in icy conditions than on a dry road.
Use headlights whenever visibility is reduced – for example, early morning, at dusk, when it’s raining or in any gloomy conditions.
Don’t dazzle others with your main beam.
When driving downhill, choose second or third gear to prevent skidding.
Take corners very slowly and steer gently and steadily, rather than with jerky movements, to avoid skidding.
Never brake if the vehicle skids. Instead, ease off the accelerator and steer slightly into the direction of the skid until you gain control.
If you do get stuck, straighten the steering and clear the snow from the wheels to give the tyres some grip. Once on the move again, try not to stop until you reach firmer ground.
If your vehicle breaks down, pull off the road as far as possible and switch on the hazard warning lights.

Look out for winter service vehicles spreading salt or using snow ploughs.
Maintain a safe distance behind salting vehicles. They have flashing amber beacons and travel at slower speeds – around 40mph.
Do not overtake unless it is indicated as safe to do so – there may be uncleared snow on the road ahead.

Travel warnings are broadcast on local TV and Radio and – also check Gloucestershire live weather and Worcester weather websites for the latest weather and road closures in your area.